A big story over the past two years has been the rise in home prices. There are many variables at play. Tight supply is one. An influx of people moving to more desirable locations is another. But rising interest rates are threatening to stymie the housing market. There are even fears that some of the recent gains could be reversed.

That has pushed home improvement retailers Home Depot (NYSE: HD) and Lowe’s (NYSE: LOW) well below the highs they reached at the end of last year. But those fears may be giving investors an opportunity. Is one of them better than the other? Wall Street thinks so. And these charts show why. 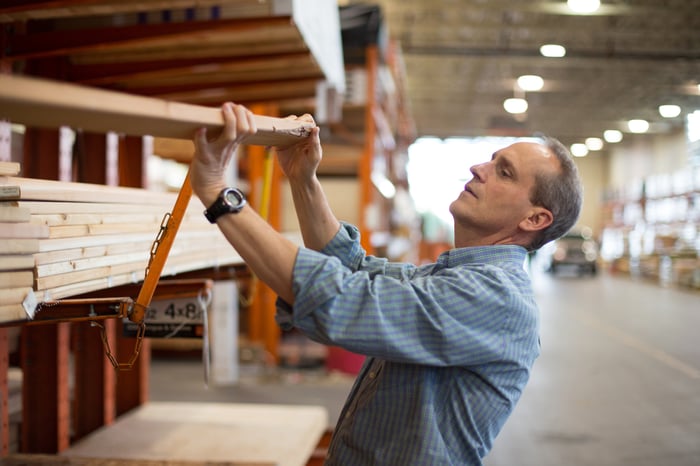 One is always more expensive than the other

For the past decade, Wall Street has been willing to pay a higher valuation for Home Depot than for Lowe’s. As the valuation of the overall stock market oscillated, the two home improvement stores did a dance of incredible predictability. Resembling poles of two magnets repelling each other, the price-to-sales ratios kept their distance. 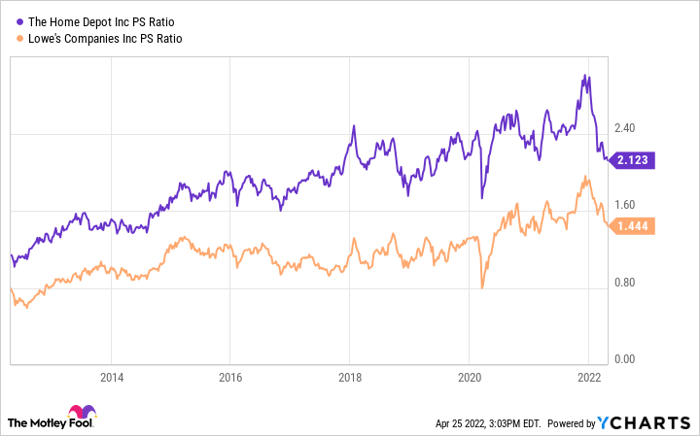 One good explanation is Home Depot’s profitability. Over that decade, its operating margin stayed at least one-fifth higher than that of Lowe’s. The company recently warned that profit margins would suffer as expenses surge.

Management went so far as to charter its own cargo ship to avoid the snarled global supply chain. Historically, Lowe’s has spent more on expenses like sales, marketing, and administrative functions such as human resources and accounting. In 2021, the difference was about a little more than 2% of sales — roughly the gap in operating margin. 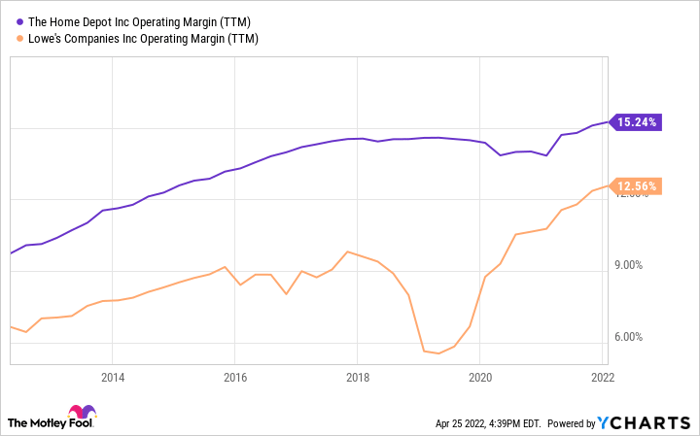 In sharp contrast to history, the recent update at Lowe’s was optimistic. In February it raised its full-year estimates for sales and profits.

And it’s in a better position to manage its debt

One area where Lowe’s seems more attractive is the amount of debt it carries compared to Home Depot. It has $30 billion in combined short- and long-term debt on its balance sheet. Home Depot has $45 billion.

But digging a little deeper reveals that Home Depot is in a stronger financial position, since it generates nearly twice the earnings before interest and taxes (EBIT). That means its times interest earned ratio — the number of times the EBIT can cover annual interest payments — is much higher. 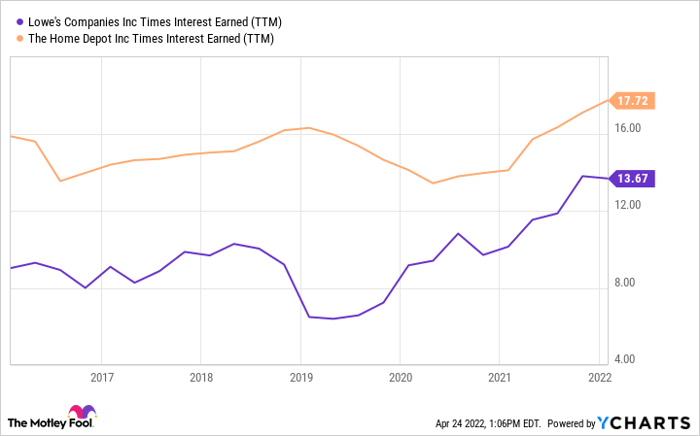 It has grown faster, too

All of this neglects the one metric many investors prioritize over all others: growth. Here too, Home Depot wins. Neither company is in hypergrowth mode, and both benefited a lot during the pandemic from consumers’ willingness to spend on housing. But over the past five- and 10-year periods, the top line at Loew’s has expanded at a slower pace. 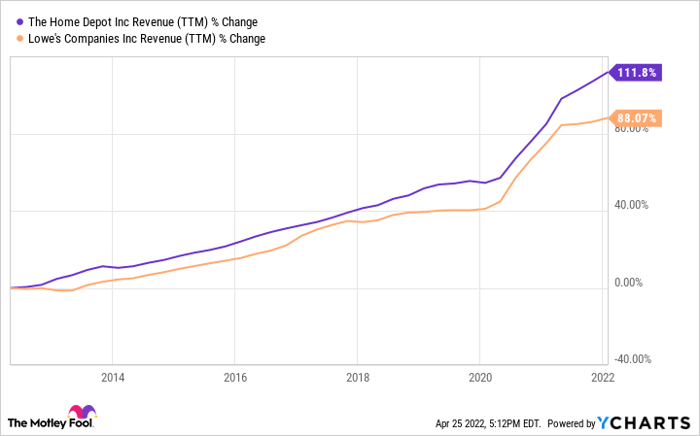 Which one pays you more to own shares?

Investors might expect Lowe’s to make up for these perceived shortfalls by paying a higher dividend to shareholders. They would be wrong. Home Depot’s distribution far exceeds that of Lowe’s. It has for most of the past decade. 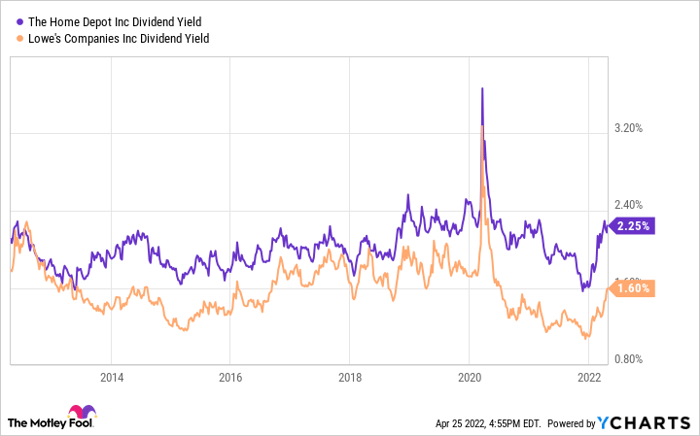 That doesn’t account for all of the ways to return capital to shareholders. Lowe’s has done significantly more stock buybacks in the past few years. In fact, it has repurchased 17% of shares outstanding in just the past three years. Home Depot has bought back just 6%.

Lowe’s also has more room to increase the dividend in the future. It sends less than one-quarter of profits back to shareholders as dividends. For Home Depot, the number is about four-fifths. Still, both can easily do it for the foreseeable future.

Is the changing of the guard near?

If you’re looking to add one of the big-box home improvement stores to your portfolio, the historical metrics make a compelling case for Home Depot over Lowe’s. But that could be changing. Differing 2022 outlooks and an aggressive buyback program have Lowe’s looking and sounding like the old Home Depot that Wall Street fell in love with.

Both offer investors exposure to an industry at the heart of the American economy. With strong capital return programs, solid margins, and manageable debt, there is no wrong choice. But Home Depot has proved it can execute over time. That’s why I would lean toward it if forced to choose. Of course, there’s no rule against buying both.

10 stocks we like better than Home Depot
When our award-winning analyst team has a stock tip, it can pay to listen. After all, the newsletter they have run for over a decade, Motley Fool Stock Advisor, has tripled the market.*

They just revealed what they believe are the ten best stocks for investors to buy right now… and Home Depot wasn’t one of them! That’s right — they think these 10 stocks are even better buys.

Sat May 14 , 2022
For the previous ten years, the Masata brand name has been synonymous with functionality in the European aftermarket scene. From chargepipes to downpipes, their line of items have enabled hundreds of car house owners to operate at their peak general performance. In certain, their chargepipes produced of aircraft quality aluminium […]